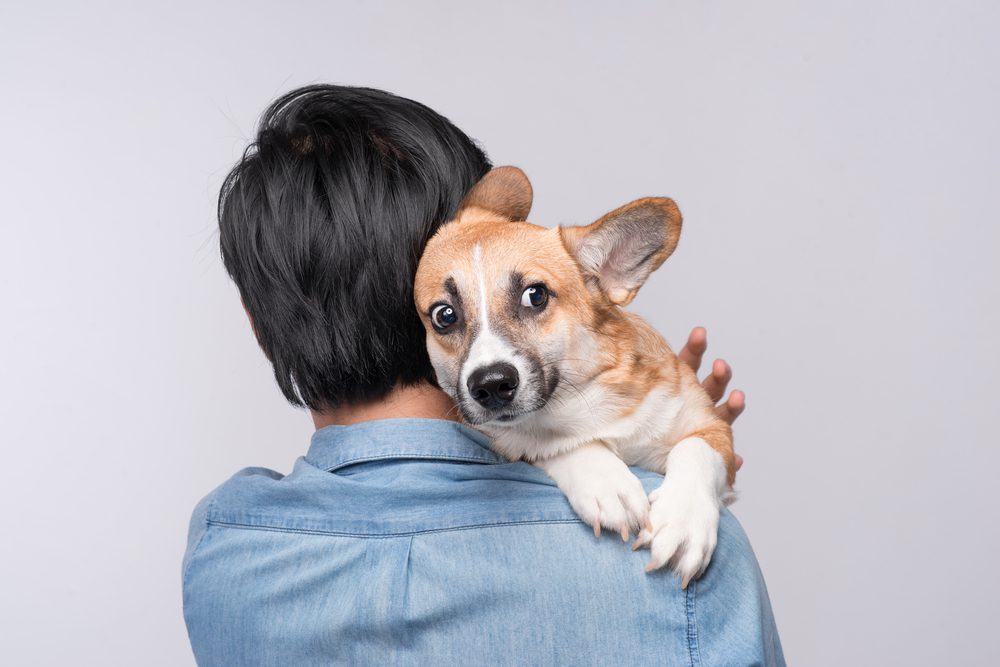 Let me explain…dogs have 99.8% DNA of a wolf.  (Scouts Honor!)  It’s true…even after 10,000 years all we’ve really done is change sizes and colors in our dogs but deep down they’re wolves.

So let’s look at wolves for a second…they have two purposes: to eat and breed.  Since they don’t like confrontation they will always take one of three options.  First is flight.  If they can, they will run.  Always.  Why? Because they are responsible for their packs.  They have mouths to feed and if they get injured in a fight they can’t provide for their pack.  Second is freeze.  They will do just that….freeze.  Sometimes they will even play dead.  Last resort is fight.

Knowing this, we can better understand our domesticated furbabies.  When we put our arms around a dog, we are immediately depriving him of his ability to run, which is in his DNA.  They are in a quandry.  They love us and want to please us but the truth is, they are simply enduring our hugs.  A study was conducted in Psychology Today “clearly shows that while a few dogs may like being hugged, more than four out of five dogs find this human expression of affection to be unpleasant and/or anxiety arousing.”

This became crystal clear to me with my Labradoodle, Ollie.  He absolutely HATES it when I touch his head or face or attempt to hug him.  He will always pull back, turn around and present me with his butt….to scratch it!

In 2010, a book written by Teddy Slater, entitled “Smooch Your Pooch” was published.  It encouraged children to hug and kiss on their dogs as much as they wanted and that their dogs loved it.  It became such an issue that the American Veterinary Society of Animal Behavior (AVSAB) released an official statement urging parents NOT to purchase the book because “this information can cause children to be bitten”.

So how do you know if your dog is uncomfortable with your hugging and is feeling stressed?  Oftentimes they will open their eyes really wide to expose the white and sometimes they half close them.  They will drop their ears down flat against their heads and they will either lick you or lick their lips.  Another sign of stress in a dog is yawning.

We typically don’t recognize the obvious stress in our dogs and so it’s virtually impossible for our children to.  Teach your kids to give a pat on the head, a scratch behind the ear (or butt in my case), and a treat! Until next time…